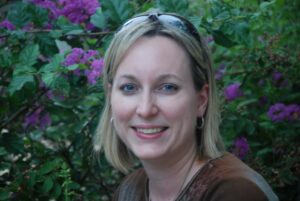 It is our pleasure to welcome a new first grade teacher to Regents Academy.

Dayna is no stranger to Regents Academy. Her daughters Hayli and Madison will enter kindergarten and 2nd grade next year, and Lilly will enter the KPrep class. Dayna is known around the school not only as a gracious and kind Christian lady but also as an involved mom and a willing substitute teacher. Dayna and her husband Michael call Nacogdoches home and have done so for many years. A graduate of SFA, Dayna previously taught at Central Heights and is glad to be serving as a teacher at Regents Academy.

The first grade students will undoubtedly have a joyful and enriching adventure next year in Mrs. Stanaland’s class as they grow in the knowledge of God and His world.

I love Pastor John Piper’s exhortation to rigorous training of the mind.

A basic and compelling reason for education—the rigorous training of the mind—is so that a person can read the Bible with understanding.

That is so obvious that it is utterly profound.

I am reminded that this is one of the great reasons we are engaged in the labor of classical Christian education. A mind that is shaped and nurtured to read the Bible well is a mind that is not easily taken in by the lies and half-lies of a thousand bankrupt philosophies and worldviews but is instead prepared to live in truth and wisdom, to the glory of God.

Blogger Jessica Hagy makes sense of the world by reducing thoughts to simple graphs on index cards. I don’t see any indication that Jessica is a Christian, but with this card she shows that she understands at least a bit about education in the Triune God’s universe.

What do we do in Christian education? We ask enduring questions that fuel wonder and spark desire for wisdom and understanding. An unboring life, indeed. God has been very gracious to 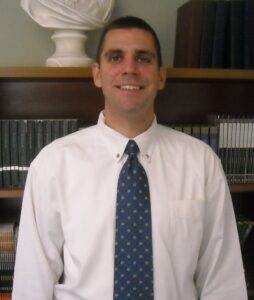 Regents Academy. We see His grace and providence at every turn — buildings, books, playgrounds, SAT scores, science labs, and all the rest. But there is no clearer evidence of His goodness than the people He has gathered into our community. St. Paul wrote to the brethren in Philippi, “I thank my God upon every remembrance of you.” The parents, children, board members, teachers, and friends of Regents Academy are precious gifts from the Lord’s hand. Every time we see their faces, we ought to be moved with profound thankfulness.

The newest face in the Regents Academy faculty is Mr. Roy Bradley. The Lord’s guiding hand has been evident as He led Mr. Bradley and his family to our school, and we are indeed thankful.

Mr. Bradley will teach omnibus, logic, and government in our Logic and Rhetoric schools. He is a graduate of Sam Houston State University with a B.A. in philosophy and music, and he has completed graduate work at Truett Seminary in Waco and B.H. Carroll Theological Institute in Arlington. Roy and his wife Christy have two children: Aaron (2) and Claire (5 months).

They moved to the area from Houston, and if you are at the school these days, there is a good chance you will see him around. If you do, introduce yourself and take a moment to begin getting to know him. He is a bright, energetic, personable man who is going to do a great job in the classroom.

What a wonderful gift the Lord has given us — a new playground for our grammar school children to enjoy. Thanks also to all our volunteers who worked in the hot sun to spread mulch.

Here you can see the project from unloading to completion. The last picture is of the smaller playground piece for the KPrep and Kindergarten students. 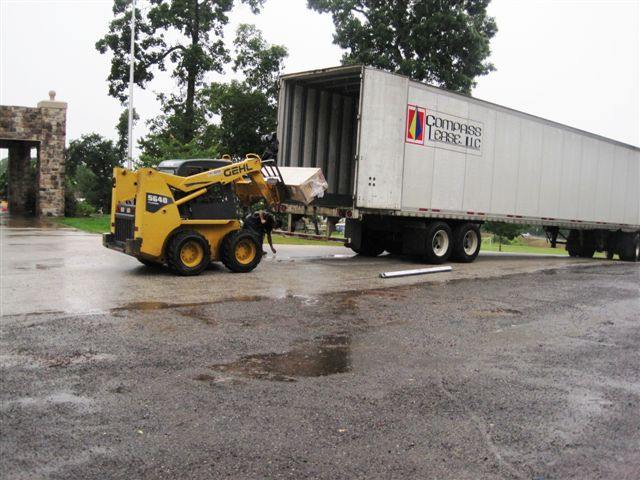 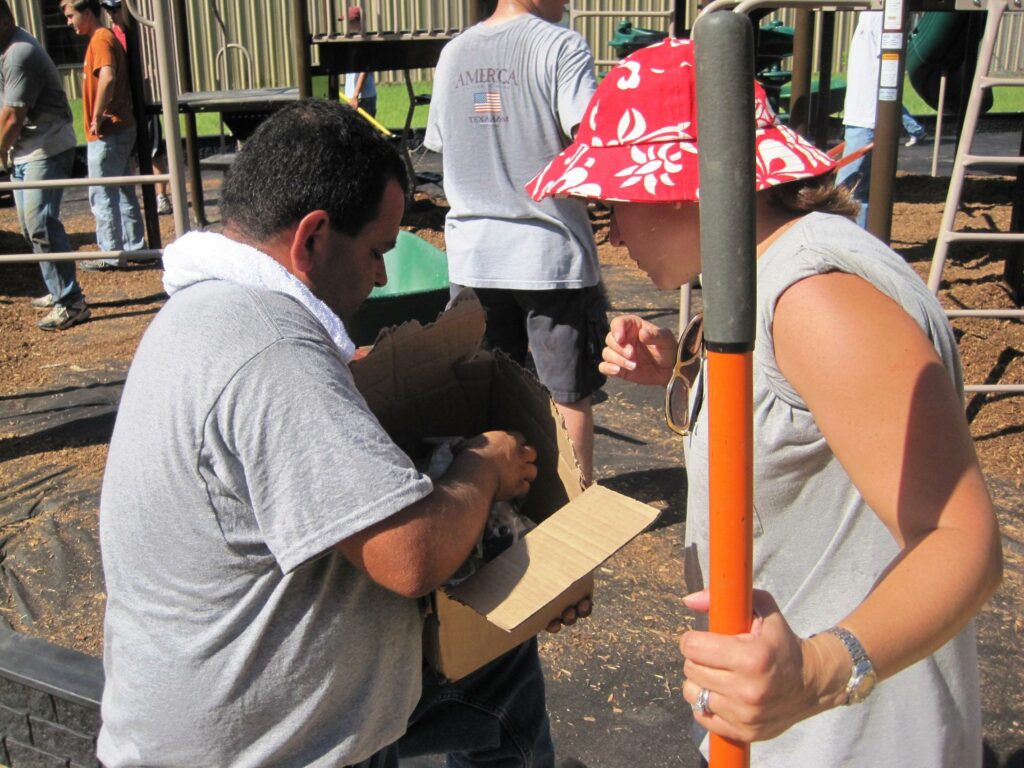 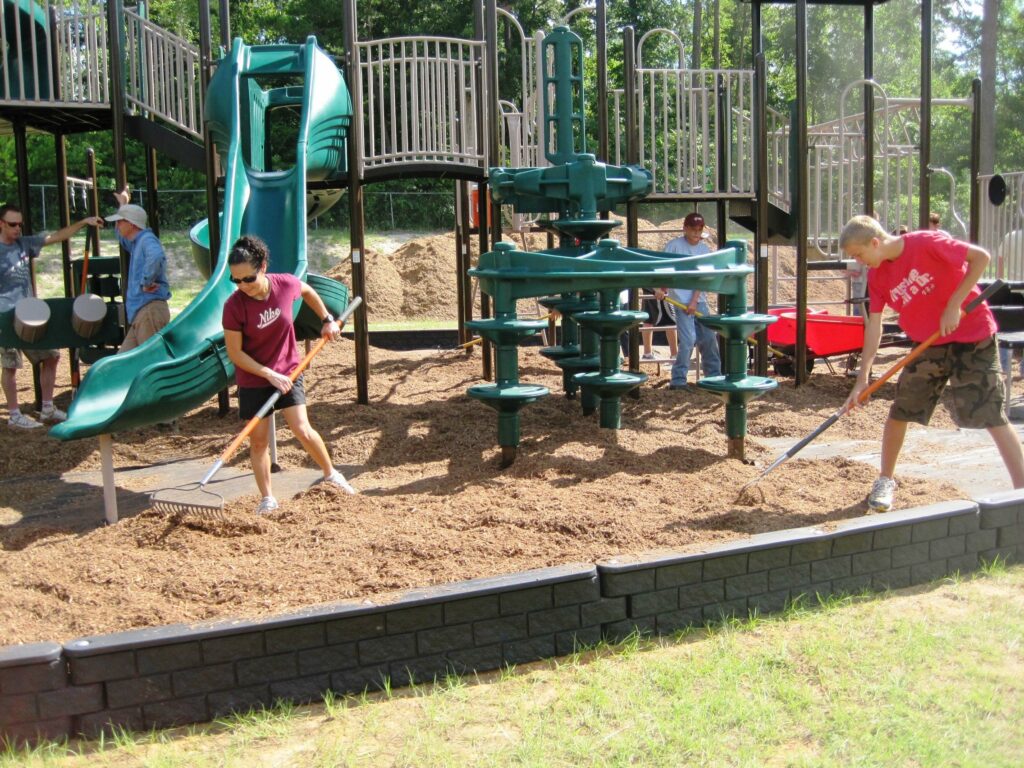 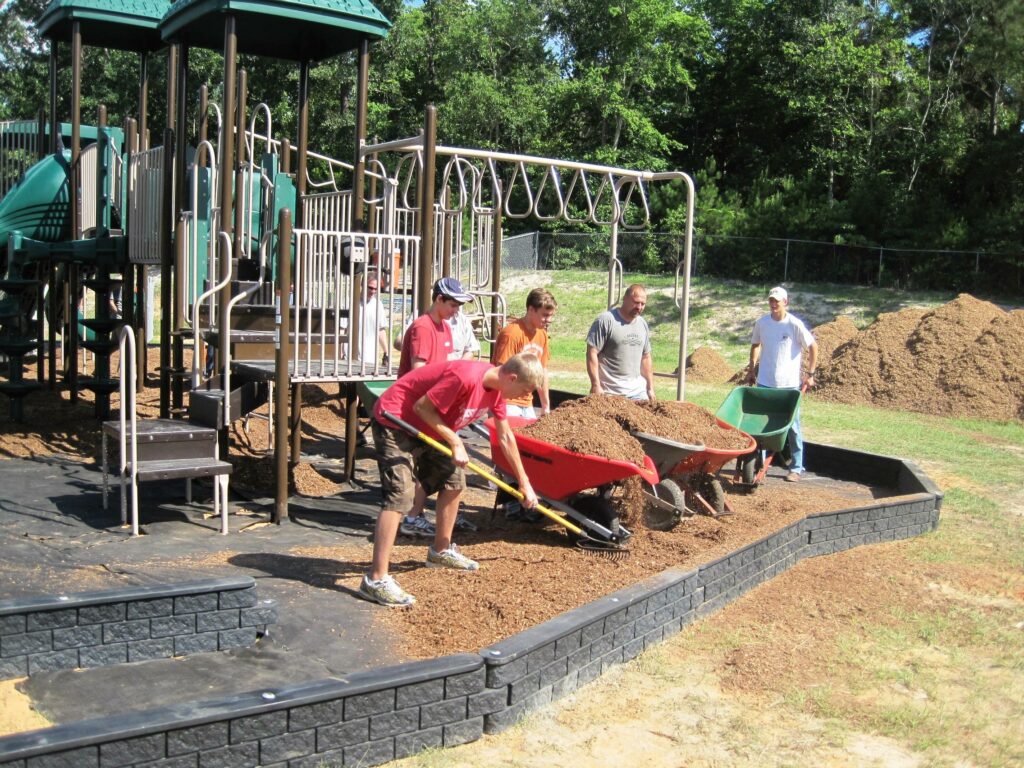 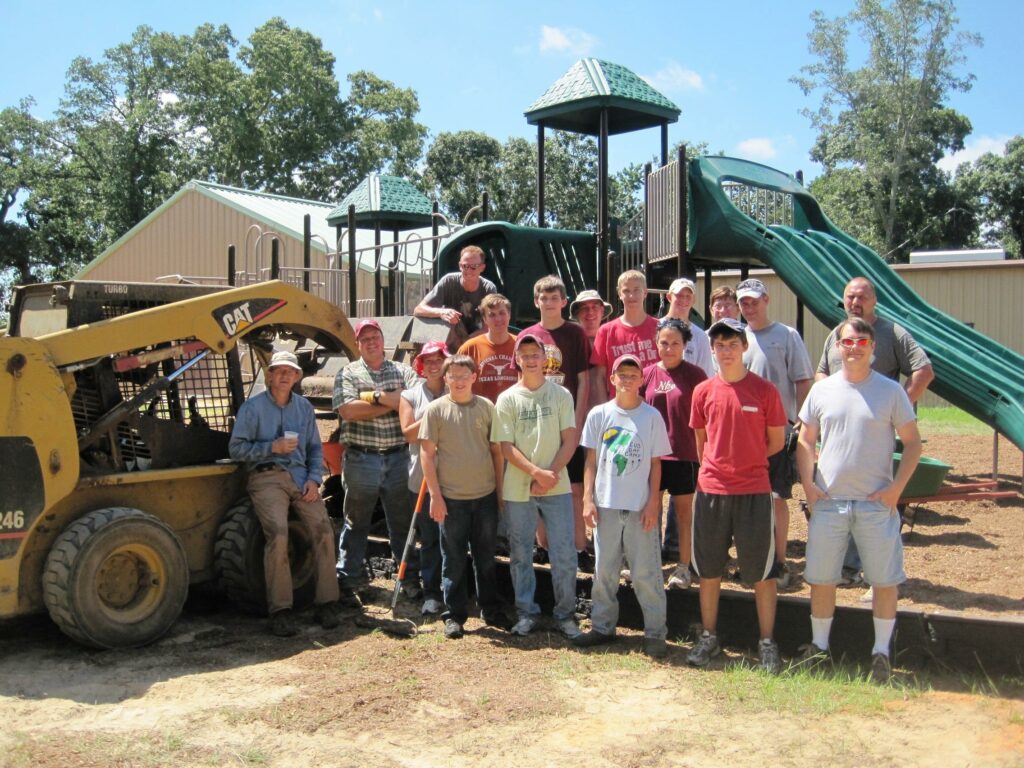 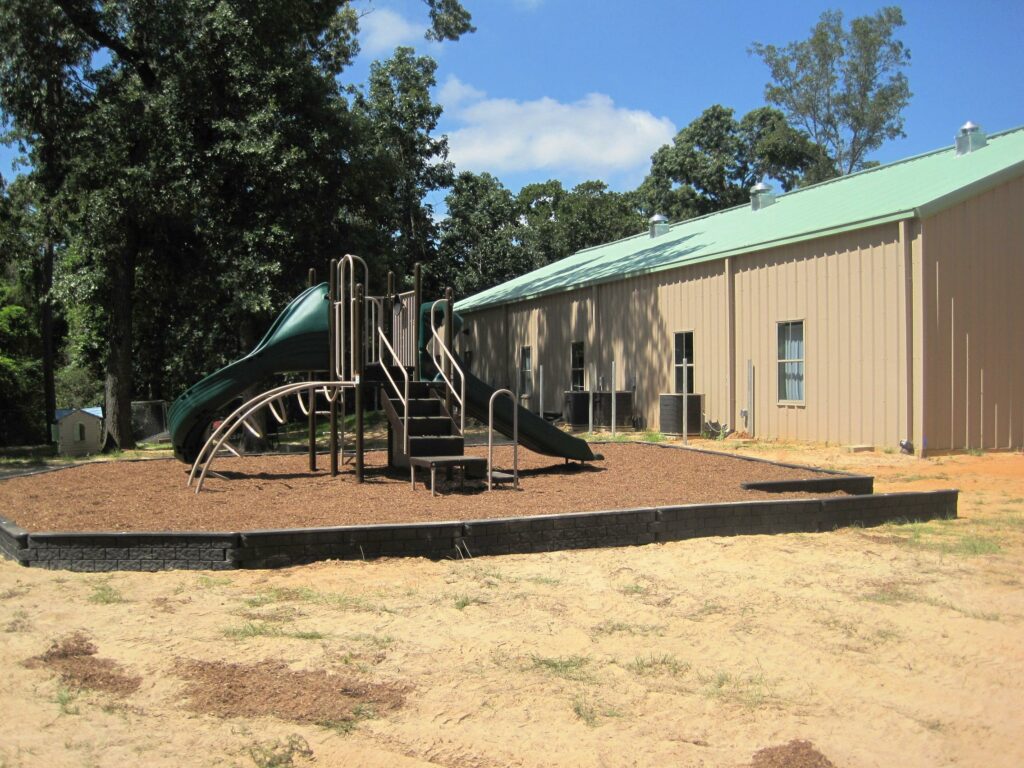 Economist Richard Weaver wrote a book titled: Ideas Have Consequences. We might consider this the “practical” side of philosophy. It matters what we think. Every idea produces a particular kind of fruit. Every culture is the product of ideas. We can look at this from the other side: consequences also have ideas. When we see a culture and its fruit, which is what we often see first, we must ask, “What ideas produced this?” Many times the ideas have not been thought about in a systematic way. We either do not evaluate the culture at all (it just is), or else the ideas seem to be random and unconnected.

This is true for us individually as well as corporately. We all do philosophy, but we don’t all do philosophy well. Our philosophies are often haphazard and inconsistent. As a result, the fruit of our philosophy is also haphazard and inconsistent. Since we are inevitably philosophers (i.e., we have ideas), we must strive to be consistently Christian in our philosophy. In our context we need a distinctively Christian philosophy of education. Remember, each of us already has a philosophy of education; the question is whether it is distinctively Christian. It’s not enough to be a Christian teacher or to have a school full of Christian teachers (i.e., those who are personally going to heaven when they die). A school building full of Christians still might not be a Christian school.

In order for us to be a “Christian” school, we must have a school founded on and practicing a distinctively Christian philosophy of education. We must be epistemologically self-conscious Christians. We must know what to do and why we are doing it: what are the children being taught? (content), and why are they being taught that way? (philosophy).

Pastor Randy Booth (from his blog Feast of Booths)

If you walk down the grammar school hallway at Regents, you will hear a lot of laughter and a lot of singing, repeating, and chanting. Children love to memorize, sing, chant, and repeat. Classical methodology capitalizes on these tendencies and emphasizes them.

The videos of this year’s senior class are available on YouTube. Enjoy them again for the first time.

Another principle for being a good school parent: Read up and understand classical and Christian education.

This seems like a no-brainer, but it’s not. Classical education is quite new to most of us, and most of us did not receive a Christian education ourselves. We want great things for our children, but we can’t achieve those great things apart from embodying the principles of classical and Christian education ourselves, in our own homes. Education goes on 24/7, not just when we drop off the children at the stone building on the hill.

Where to start? Here is a list of books to lay your hands on and read. If you would rather listen to a lecture, check with the school office about borrowing a CD of a classical Christian educator’s speech or lesson. We have tons of them.

1.    Recovering the Lost Tools of Learning by Douglas Wilson.
This book, based on Mr. Wilson’s successful venture with Logos School in Moscow, Idaho, has been the pioneering guide to the renewed interest in classical Christian education.

2.    Repairing the Ruins: The Classical and Christian Challenge to Modern Education by the staff of Logos School in Moscow, Idaho.
This collection of practical essays gives insights into applying the classical model to the curriculum and administration of a school.  The authors have all worked in the Logos School which has been the model for many classical Christian schools.

3.    The Christian Philosophy of Education Explained by Stephen Perks.
This text clearly defines Christian education. It is not to be academically inferior, culturally retreatist, or modeled after the humanistic schools.  This book shows how Christian education should be explained.

4.   “The Lost Tools of Learning” by Dorothy Sayers.
English scholar, mystery novelist, and Christian thinker Dorothy Sayers wrote this insightful, idealistic essay many years ago.  It outlines the model used in classical Christian education called the Trivium, and it explains how the grammar, logic, and rhetoric stages naturally fit the mental growth of children and the mastery of a field of knowledge.  She had no idea or expectation that her essay would have such a tremendous influence in the latter part of the twentieth century.  But “ideas have consequences.”

5.    The Case for Classical Christian Education by Douglas Wilson.
Doug Wilson says that education must deal with basic questions of life — questions that require religious answers. Building on his previous book, Recovering the Lost Tools of Learning, Mr. Wilson encourages parents and educators to turn to Christian classical education.

6. The Seven Laws of Teaching by John Milton Gregory.
First published in 1884, this presentation of the laws of teaching is a timeless guide to the basic principles of good teaching.

7. The Outrageous Idea of Academic Faithfulness by Donald Opitz and Derek Melleby.
This book provides excellent guidance and counsel for those preparing for one of the most difficult transitions of life — that of leaving high school and entering college. Helpful for students and parents alike.

8. Amusing Ourselves to Death by Neil Postman.
Though Mr. Postman is now deceased, his work lives on, encouraging 21st century people who are immersed in digital media to re-think the power of the printed word and resist the ever-present temptation to be amused to death by the trivial and banal influences of television and electronic media.

9. Shepherding a Child’s Heart by Tedd Tripp
More than a handbook on parenting, this book is a guide for parents to apply biblical truth to childrearing. The principles in this book are also an excellent guide for the discipleship and discipline of students while at school.

Is there a such thing as a right answer on a math test? Apparently not, at least in New York.

Thankfully, there are still right and wrong answers on math tests at Regents Academy. It’s hard to believe that this would be a way that we would defy the educational wisdom of the age. But that’s what we’re doing.