A huge thank you to our friends at Encompass Home Health for their $1,000 donation to the Big Serve. Encompass has been a faithful supporter of Regents Academy for many years now, and we thank God for them!

Pictured below is Encompass representative Kim Russell, along with Regents students James Vermillion and Emma Rasberry, saying thank you for the Encompass donation. 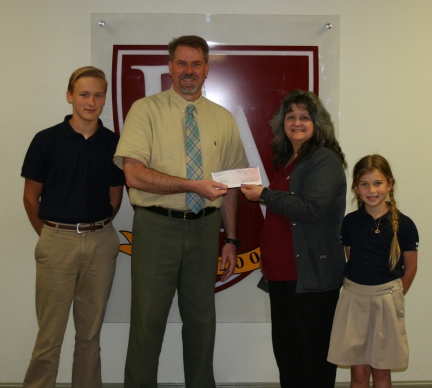 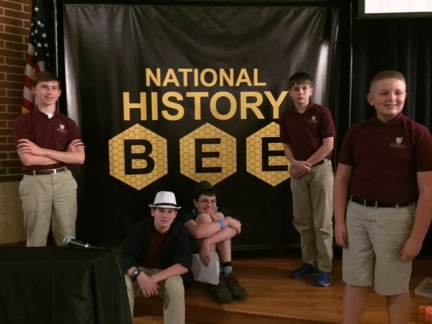 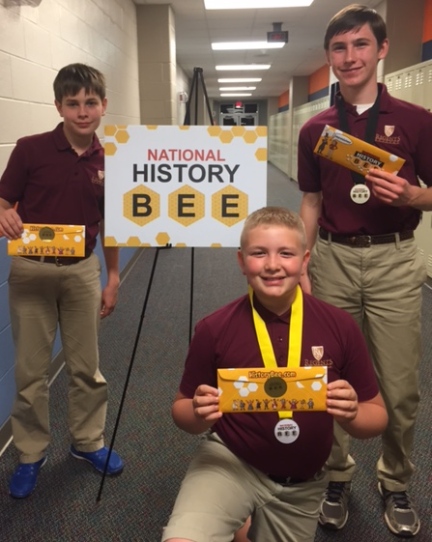 One thing that sets classical Christian education apart is its emphasis on developing students’ ability to think well. Of course, there is a version of this emphasis called “critical thinking,” an approach that is secular, relativistic, and aimed toward enshrining the autonomy and authority of man over God. However, for a classical Christian school such as Regents Academy, teaching students to think means training them to adopt a Christian worldview so that they can critique all ideas and truth statements and subject them to the absolute truth claims of Scripture. The fruit, with the help of the Holy Spirit, is viewing all areas of life and faith with a thoroughgoing Christian worldview. As our school states in our Vision for a Graduate, we aim to train students to have “sound reason and sound faith,” who realize “a unified Christian worldview with Scripture as the measure of all Truth. We expect them to exhibit the wisdom to recognize complex issues and to follow the consequences of ideas.”

Author and apologist Ravi Zacharias, in an online interview, discusses this process and applies it in a striking manner. Parents, is this what you envision for your children? I would encourage us all to find the full interview online and read the entire text – it is quite excellent – and gain a vision for training our children to possess the skill of Christian worldview thinking.

Here is an excerpt from the interview:

Would you begin by defining critical thinking for us?

Ravi Zacharias: Let me put it in the simplest words I can. The word “critical” often comes through as negative; that is, you’re criticizing somebody. Strangely enough, if you use the word “critique,” it comes through more positively because you are critiquing a book or critiquing an essay. I think critical thinking has two components to it. The main component is when you’re analyzing any propositional statement or system of thought, you are engaged with critical thinking whether you like it or not. So the only question is, are you doing it well? Are you doing it in a way that is befitting the subject or are you doing it unjustly? The second aspect of it is the ethical implications of whatever it is you have processed.

So I like to think of critical thinking as an analytical process of evaluating the truth component of the statement or thought you are processing. That has to be done. If you are looking at a worldview, any assertion, or any challenge to your own worldview, you have to evaluate it on the basis of truth, the coherence of what is being claimed, and then the implications of what this means for your personal life. So first there is an analytical component to it—the truth component, the synthesizing component. And second, at the end of it there must be an application or an imperative component to it. We must think critically especially in defending our worldview or in challenging a counter perspective. So critical analysis of worldviews is what critical thinking is all about.

RZ: The Christian still for some reason is charged illegitimately with being the only one who is exclusive. I have said it many times before: all worldviews claim exclusivity, but somehow it is popular to hit the Christian as the only one that lays claim to this. Yes, we do lay claim to the fact that Jesus is the way, the truth, and the life. There is an exclusive claim made by Jesus in the pages of the Scriptures. But exclusivity is also claimed in the pantheistic worldviews and in all of the monotheistic worldviews. So for the Christian, it should be done gently, it should be done efficiently, effectively, and with respect when you are talking to anybody.

I’ve just come back from parts of the world where I had to be so careful in what I said and how I said it because ninety percent of the audience sitting in front of me was not sympathetic towards my belief. I was engaged in a critical analysis of my own worldview and then showed why it was tenable and coherent. So for the Christian today, and especially for our young, it is important to instruct them not only on how to defend what we believe but also how to do it with gentleness and respect. As Peter tells us in 1 Peter 3:15-16, to do that with gentleness and respect to always be able to give a reason for the hope that is within you. It is imperative upon us to do it justifiably and to do it respectfully.

What about people such as the new atheists who accuse Christians of being irrational and lacking critical thinking skills? After all, we believe in a Jesus who walked on water and was born of the Virgin Mary. That seems fairly irrational to the average skeptic.

RZ: You know, I find the atheist very clever in what they do. For example, why do they discount miracles? According to David Hume, because the natural law functions routinely—so why do you look for miracles, an oddity in the midst of natural law? So they did away with the miraculous because they were going with what was normative and what was routine. But then when it came to ethics, they very cleverly switched the terms. If you started talking about an absolute, which was normative, they would interject an exception like, “What happens if you walk into your home and your family member is being assaulted? Are you telling me you will not fight or take a baseball bat or something?” Very fascinating. When it came to natural law in the realm of the sun and the planets, they did not allow for the exceptions. But when it came to ethics, it was the exception that debunked the absolute.

So what do those two reactions have in common? They both want to get rid of God—because if you bring in the miraculous in natural law, you have to accommodate the presence of God. If you take the normative and the absolute in ethics, you have to invoke upon the very person of God. So it is more the atheist that is anti-reason and anti-rational, but the accusation that is made against the Christian is leveraged to their advantage now.

But what about the origin of the universe? Is it repeatable? No.They themselves say this could never happen again. What about the contingencies that it took? Thirty some contingencies the exactitude demanded. The very fact that you and I are here is the process of what even atheists would sometimes say is so awesome that it is tantamount to being something like a miracle. Some of the scientists have used that very word. So what I say to them is, you have already accepted that which is not repeatable. You have already accepted that which is so rare. You have already accepted the fact that when you come to a singularity, you are actually seeing the laws of physics do not apply to all of those origins. Do we really think that the consummation of love between and a man and a woman and the birth of a child is just something that is explainable so naturalistically? Rather than seeing the miracle of birth and the wonder of it, we think just by describing it that we have debunked the notion of the miracle.

So when we talk about walking on water and the miraculous, we are talking about a theistic framework. When you are able to defend the existence of God, you also talk about the intervention of God in history and the intervention of God in the process of a natural law. To me, the very fact of natural law is a miraculous expression of God to sustain life. You remember when we had the two astronauts visiting us here at the office. They talked about looking through the windows of space as they were orbiting the earth and seeing something so unique about this planet and its particularity. I think we live with the miraculous every day.

On March 2, Regents Academy 4th and 7th graders attended the bell ringing ceremony at the Old University Building in Nacogdoches. The yearly event was sponsored by the Daughters of the Republic of Texas and celebrated Texas’s 180th anniversary. You can see video below, from KTRE.