A friend passed on to me a fantastic article written recently by Marvin Olasky, editor of WORLD magazine. Our vision at Regents Academy lines up wonderfully with what Mr. Olasky shares.

E=mc2 is a simple equation compared to the mystery of what goes into good education. But I’ll take a shot at proposing an education equation.

(1) Start with the three Rs, reading, ’riting, and ’rithmetic.

(2) Move quickly to the opening line of a great John Newton hymn repopularized by Jars of Clay: “Let us love and sing and wonder.” If children don’t develop a sense of wonder about this astounding, God-created world, they’ll miss a lifetime of excitement. Music, art, history, science, foreign languages, and more should all make school wonder-full.

Our new testing regime doesn’t leave much time for wonder, and educators pay attention to the W only if they answer accurately a basic question: Who are my students? Are they animals with above-average intelligence (compared to horses and caterpillars, but maybe not dolphins)? Are they low-grade computers with below-average memory and above-average weight (compared to a MacBook Air)? Or are they human beings created in the image of a God of wonder?

(3) Add a C for specifically Christian education, for only in Christ do all things hold together. If students don’t understand that God created us, they are likely to become practical atheists. If they don’t understand that God gives history meaning, they are likely to become nihilists. Schools cannot give kids faith in Christ—only God can—but they can help students recognize their need, yearn for meaning, and not be content with wasting their lives.

Please do take Christian education seriously: No other work is more important.
If teachers want to be educators rather than prison wardens, it’s vital for them to think Christianly about their students. If they see students as bucking broncos, they’ll think the job of schools is to break them. If they see students as fleshly computers, they’ll want to perform an information dump. But if they understand that students are God’s children and have souls that never die, they’ll understand that just teaching to the test fails the biggest tests.

(4) The G is for the four-letter word that more than any other determines educational and occupational success: grit. University of Pennsylvania professor Angela Duckworth developed a “grit scale” and found that undergraduates with determination were more likely to obtain high grades than those with higher SAT scores but less grit. The grittiest West Point students she tracked did better in cadet training than those who scored higher on traditional aptitude tests.

Part of grit involves fighting the desire for immediate gratification, an impulse measurable at age 4 via the marshmallow test, which starts with a small child in a room with a marshmallow and an adult. The adult tells the child he’s leaving the room to run a short errand. During that time the child is free to eat the marshmallow—but if he waits until the adult comes back, he can then eat not only that marshmallow but a second one as well.

Children’s ability to wait for gratification varies enormously. When Stanford psychology professor Walter Mischel, inventor of the test, looked in on those 4-year-olds a decade later, he found the impatient eaters had “lower SAT scores, higher body mass indexes, problems with drugs and trouble paying attention. … The seconds of time preschool children were willing to delay for a preferred outcome predicted their cognitive and social competence and coping as adolescents.”

Another study showed self-discipline to be twice as important as IQ in predicting grades of eighth-grade students. One large study, which traced about 1,000 New Zealanders from childhood through age 32, similarly found that those with less childhood impulse-control were more likely to be alcoholics or drug abusers, overweight or unhealthy—and were more than three times as likely to have been convicted of a crime. So, schools along with teaching the three Rs, W, and C need to do all they can to develop G for grit.

So, that’s my formula: E=R3WCG three Rs times Wonder times Christian understanding times Grit. We need all of those elements: A Christian school that has chapel yet doesn’t encourage wonder and grit among its students is wasting money and lives. But don’t take school formulas too seriously: Kids are individuals and flexibility is important. Please do take Christian education seriously: No other work is more important. May God bless all those who make large sacrifices to bless other parents and children.

What is the Proper Goal of Education?

Is the proper goal of education to insure a good job and income for adult life, or, is man’s chief end to glorify God and enjoy Him forever? “What shall it profit a man if he gain the whole world and loose his own soul?”

The child is created in the image of God. To remove this central fact from the child’s education is to pervert the God-given intent of education. The goal of moral education (and all education is to be moral) is to teach the child to distinguish that which is genuinely good from evil?that which is true from false?on God’s terms. Fallen men seek to do this one their own terms, even as Adam and Eve did in the Garden. Hebrews 5:14 tells us that only those who have had their sense “trained in the word of righteousness can discern good and evil.”

Regents seniors served up delicious samples of Butter Braid during morning pick-up. What a good-looking group! 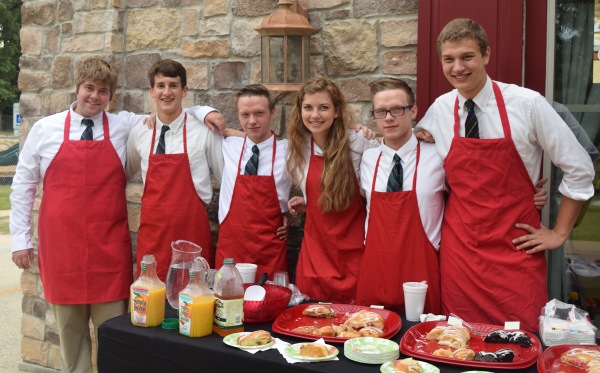 Regents families sell tasty Butter Braid pastries as a way to raise needed funds for our school. The deadline for orders is Friday, September 18. 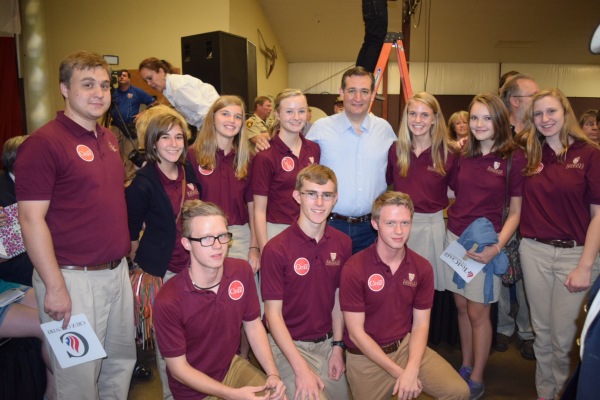 Obedience is a very important ingredient in the culture at Regents Academy. Teachers stress it, as do I. One of our school’s slogans is, “We obey right away, all the way, with a good attitude every day.” The Bible speaks to children and commands them to obey parents and all authorities over them. Though “obey” may be regarded as a four letter word by some, for our students joyful obedience is a virtue, a beautiful adornment for a well-ordered life.

But there is a danger in stressing obedience. We must be careful never to give children the dangerous illusion that if they have obeyed their parents and teachers, then they are acceptable to God. That would be a terrible cause of stumbling and a sure way to insure a millstone will be hung around our necks. Instead, we must be consistent in communicating to children – both with words and with example, in discipline and in instruction – that they cannot obey their way to acceptance with God. Instead, they (like us) need Jesus Christ to be their Savior, who transforms us so that we love doing what is pleasing to Him, obeying human authority included. This is to say that we require children to obey, but we always want to lead them to ask, Why obey?

This is precisely the question author Paul David Tripp asks in the article I am sharing with you now. It is the best of news (for us and for our children) that we are set free from trying to win God’s favor by obeying Him well enough. It is also good news that our obedience is established by His grace toward us.

Why Obey?
By Paul David Tripp

There’s simply nothing you can do to gain God’s favor.

You have to accept this and remember it: you will never be righteous enough for long enough to satisfy God’s holy requirements.

We all live under the same weight of the law, crippled by the inability of sin. We’re better at rebelling than submitting, more inclined to arrogance than humility, more skilled at making war with our neighbors than loving them. We leave a trail of evidence every hour that we’ve fallen short of the glory of God one more time.

So what’s the point of obedience in the Christian life? Well, this hard-to-swallow pill of bad news is actually the doorway to eternal hope and joy, not depressive self-loathing. How? It’s only when you accept who you are and what you’re unable to do that you begin to understand and celebrate the necessity of God’s gift of grace.

Let’s put the bad news and the good news together. The Apostle Paul writes, “for all have sinned and fall short of the glory of God,” but that’s only half of the story. He continues, “and are justified by his grace as a gift, through the redemption that is in Christ Jesus, whom God put forward as a propitiation by his blood, to be received by faith.” (Romans 3:23-25, ESV)

A propitiation is an atoning sacrifice. The sacrifice of Jesus appeased the wrath of God and created a reconciliation between God and all who place their faith in him. In more simple words: you don’t need to obey to gain God’s favor.

Don’t misunderstand me: grace doesn’t make obedience optional. Obedience is the life-long calling for followers of Christ. But, your obedience is never a fearful payment. It’s a hymn of gratitude to the God who met you where you were and did for you what you could not have done for yourself.

Your obedience doesn’t purchase God’s love for you; Christ’s blood is the only purchase that could do that. Rather, your obedience is a thankful expression that you understand the significance of God’s love being placed on you.

So today, humbly admit that you’re more messed up than you think you are. And commit once more to a lifestyle of obedience, not because Jesus needs you to, but because you understand how much you need Jesus.