1. Order. You may be wondering, “What can I do with logic?” The answer is that logic can do something with you. Logic builds the mental habit of thinking in an orderly way. A course in logic will do this for you even if you forget every detail in it (which you won’t, by the way), just as learning Latin will make you more habitually aware of the structure of language even if you forget every particular Latin word and rule.

Logic studies the forms or structures of thought. Thought has form and structure too, just as the material universe does. Thought is not like a blank screen, that receives its form only from the world that appears on it, as a movie screen receives a movie.  A study of logic will show you the basic forms (structures) and the basic laws (rules) of thought, just a a course in physics or chemistry shows you the basic forms and laws of matter. [Adapted from Peter Kreeft, Socratic Logic]

As a teacher (and student) of logic, I am sometimes asked to provide a brief and understandable explanation of what logic is and why it is important. I must say that my response to such questions is often neither brief nor understandable. The difficulty in adequately explaining the nature and function of logic and its usefulness to someone who has had no formal exposure to the discipline is that, for it to be successful, the explanation must (1) not include any obscure terminology specific to the discipline itself, (2) be coupled with practical examples of how it works, and (3) provide a case for why it should be employed, provided that task (2) doesn’t make this point evident.

I am learning that instead of trying to offer a broad definition of “logic” and then giving examples of how it is used (and abused), it is sometimes more helpful for someone to hear some good reasons why logic is useful and then from that information, induce for himself what logic is. After all, I sometimes do not understand what something is until I know what it is good for; and once I know what it is good for, then I am able to ascertain, to some extent, what it is. The same, I think, may be true about a person’s introduction to the discipline of logic.

Therefore, in the spirit of introducing people to logic through this back door approach, I’d like to offer a series of posts entitled “What is logic and what is it good for?” that delineate some concrete (and enlightening) reasons for why logic should be studied, especially by Christians. This list is adapted from Peter Kreeft’s fine book, Socratic Logic. Most of what you will read in this series will be his work. However, I have freely edited some parts of it to better fit the purpose and format of these posts. More to come…

Mrs. Cunyus’  2nd grade class visited the local Lone Star Feed Store to purchase vegetable plants for their gardening  project. Students also got to hold baby chicks and rabbits that were offered for sale at the farm store. Some other items that students were interested in were the local honey, livestock medications and identification supplies, seed packets, and supplies for small animals.

Haris Hashim holds the plant he selected at the local farm supply store. Students were very excited about riding in the new school bus on this field trip! Students prepare soil for planting in the 2nd grade vegetable gardening project. The class has been studying botany; roots, leaves, seeds, and plant life cycles.  Students enjoyed meeting other farm animals on their field trip. They were able to pet the farm’s chickens and rooster, goats, horse, dogs, and cat. 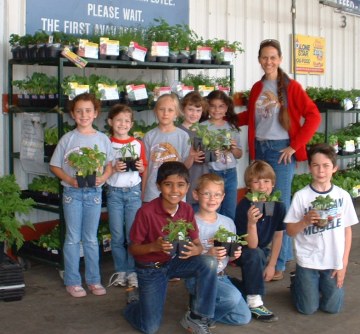 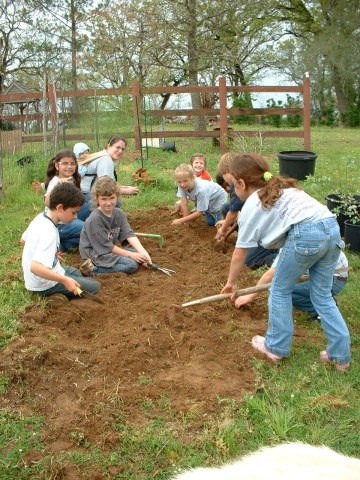 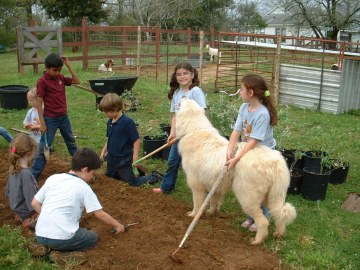 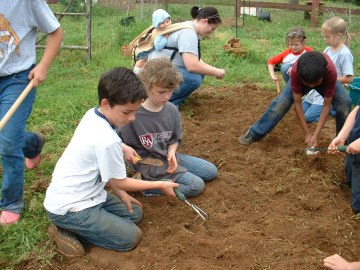