Low standards are a plague. They are a plague on the home, in society, and most certainly in education and youth culture. Teens are expected to be vulgar, boorish, self-centered, monosyllabic slackers whose slogan for life is “Whatever.” To be counter-cultural in today’s context is to expect children and teenagers to be thoughtful, diligent, enterprising, and polite, and to hold a biblical standard of maturity in their behavior and words. These are aims for the culture at Regents Academy, ones that we often fail at but that we hold with all our hearts. A school embodies a culture, and biblical standards that resist the lowball expectations of typical youth culture is a hallmark of the classical Christian vision.

I hope that you, too, are rebelling against our culture’s low standards. Two young men who are doing just that are Alex and Brett Harris, high school-aged authors of the book Do Hard Things. The Harris brothers are, as WORLD on Campus reports, still doing hard things now that they are in college. Their story is worth reading, and better, emulating.

Continuing the Call to Do Hard Things
By Hannah Taplin

Four years ago, when they were just 19, twins Alex and Brett Harris released their best-selling book, “Do Hard Things.” The book encouraged teens to rebel against the low expectations of today’s culture by stepping out of their comfort zones and taking on challenges no one expected them to address – fighting against abortion, learning an activity like public speaking, refusing to watch bad movies, or simply performing unassigned household chores – all for the glory of God.

Now seniors at Patrick Henry College (PHC), in Purcellville, Va., the Harris twins are ready to carry that message into adulthood. As he reflects on his time in school, Alex Harris has one main piece of advice for next year’s freshman – beware the freedom college offers and embrace the new responsibilities as challenges and opportunities to shine.

When “Do Hard Things” came out in April 2008, the twins became mini-celebrities in the nationwide Christian homeschool community. But before that, they were just normal teenagers – with a passion for great things. They first got the idea behind the book in 2005, when their dad set a huge stack of books on the kitchen counter and announced that he was putting them on an intense reading program for the summer. With topics ranging from history, philosophy, theology, science, business and journalism, the pile looked a bit intimidating. But as they read, they become more and more concerned about their generation and the misconceptions about the challenges teens were capable of taking on. In an effort to share their thoughts, the brothers started a blog, founded The Rebelution, a movement to encourage teens to disprove the world’s low expectations for them, and later wrote “Do Hard Things.”

The book’s publication brought opportunities for speaking engagements, traveling and more writing. And after all the attention the Harris brothers got while still teenagers, one of the best parts about college was being able to be a normal student, Harris said. The twins came to PHC with a desire to build relationships and earn respect based on their actual interaction with other students, and not on things others had heard or read about them. […]

Graduating in May with a degree in government, Harris plans to attend law school in the fall. He got accepted at the nation’s top three-Harvard, Yale, and Stanford-and has chosen to enroll at Harvard. “[L]aw intersects with numerous fields, including government,” Harris said. “Legislation, regulation, and judicial decisions are all about making and interpreting the law-so there’s a very strong connection.” While his plans are far from settled, Harris said he believes God is calling him to use his law degree to make a difference in the arenas of public policy and government. “That could include arguing cases in court as an appellate lawyer, ruling on cases as a judge, influencing the public policy conversation at a think tank, or running for political office – or more than one of those!” He still urges his generation, now young adults, to realize the importance of becoming involved politically by being engaged and informed.

Although the dismal job market and the rising cost of higher education has caused some to question the value of a college degree, Harris believes that the investment was worth it, even for someone who already had accomplished more than the average teenager by the time he started submitting his college applications: “[It was an] opportunity to grow, not just in knowledge, but in maturity and responsibility.” College also gave Harris the opportunity to pursue his passion for politics. Unlike many students, who change their major multiple times, Harris planned to major in government from the beginning and stuck with it all the way through.

Even though Harris values the time he spent in college, he cautions others to think through their reasons for going before sending in their applications. Many teens feel pressured to go to college because it’s the next step, Harris said. Even though a college degree can be important, going to college aimlessly just wastes time and money, he said: “If you decide to go to college, have a sense of direction, because that will really ground you and make your time more productive.”

It is clear that the Liberal Arts—classically understood to be the study of grammar, logic, and rhetoric—has become passé in the modern context. Part of the reason, it is claimed, is that the study of these arts is not directly related to any particular marketable skill; there is no quantifyable payoff for mastering these disciplines, no price tag on them. Many employers are ready and willing to purchase a person’s skill or knowledge in medicine, mechanics, engineering, or accounting, to name a few—there is a price tag on these disciplines. But, ironically, the value of the Liberal Arts lies precisely in their intransitive nature; that is, “the effects of studying these arts stays within the individual and perfects the faculties of the mind and spirit” (Marguerite McGlinn). They cannot be purchased in the job market, for no amount of currency is worthy of them.

In her wonderful book, The Trivium: The Liberal Arts of Logic, Grammar, and Rhetoric, Sister Miriam Joseph likens the study of the Liberal Arts to the blooming of a rose.

In true liberal education…the essential activity of the student is to relate the facts learned into a unified, organic whole, to assimilate them as…the rose assimilates food from the soil and increases in size, vitality, and beauty. […] The utilitarian or servile arts enable one to be a servant—of another person, of the state, of a corporation, or of a business—and to earn a living. The liberal arts, in contrast, teach one how to live; they train the faculties and bring them to perfection; they enable a person to rise above his material environment to live an intellectual, a rational, and therefore a free life in gaining truth.

The teacher of the Liberal Arts, then, is like a rose gardener, carefully pruning and producing conditions conducive to growth. Yet, the analogy can’t be pressed beyond this point, since the rose gardener is actually a rose himself, steadily being cultivated by the Liberal Arts.

May the classical understanding of the value of the Liberal Arts be redeemed in our day to the glory of God.

Regents Academy is a member of the Association of Classical and Christian Schools (ACCS). This organization is a great partner for our school as we seek to provide an excellent classical Christian education for our children. The ACCS national conference is in Dallas this year on June 21-23. Most of the staff and board are attending, but it will be a great conference for parents also.

I want to encourage all Regents parents to consider going. I promise: you will not regret it!

Recently ACCS listed some benefits for parents who attend:

If you are interested in attending or want more information, please see me. You can also visit the ACCS website at accsedu.org. We would love for a group of parents to accompany us on the trip!

Miranda competed in the TAPPS State Music competition held at the University of Mary Hardin Baylor last Friday. She was awarded a gold medal for her solo violin performance. The music she played was a UIL Class Rating 1 for which she received a “Superior” ranking (which means she played a selection from the top level of music and received the highest score you can earn).

This was our first foray into TAPPS Music competition. Great job, Miranda! 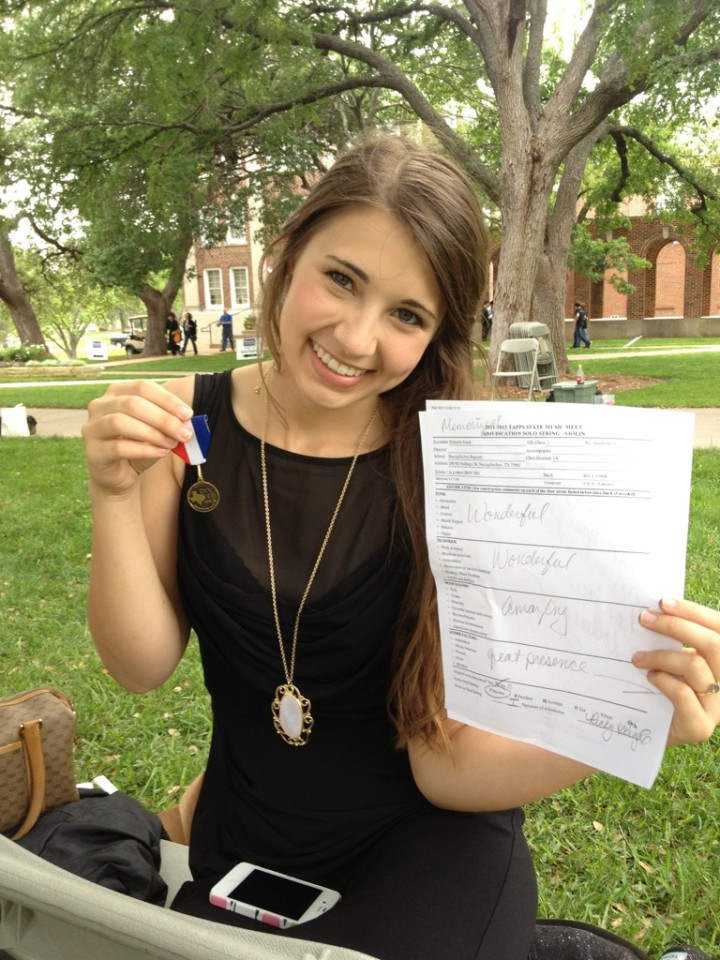 The Mayor joined us and spoke to the Government class. (Pictured below is our mayor, Dr. Roger Van Horn, with freshmen Michaela Hill, Jon Sowell, and Kendall DeKerlegand.)

The fire alarms went off – NOT as a preplanned drill. Our City’s fine firemen paid us a visit.

The seniors, juniors and sophomores enjoyed comfy seats in the 4th grade desks, with a new understanding of how Alice must have felt in Wonderland. (Pictured below is senior Will Alders.)

All of this occurred in the presence of an on-site camera crew, here to film a new Regents Academy commercial. (Pictured below is the first grade class with Mrs. Dayna Stanaland.) 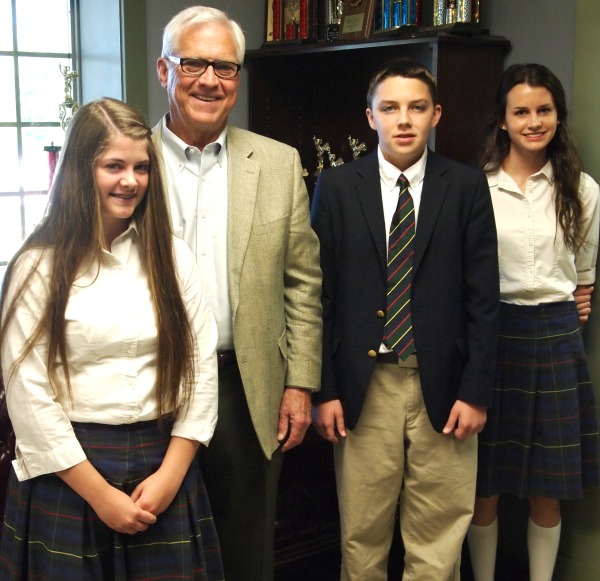 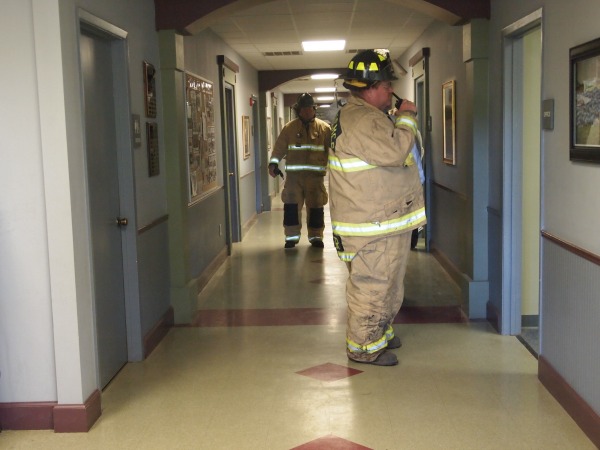 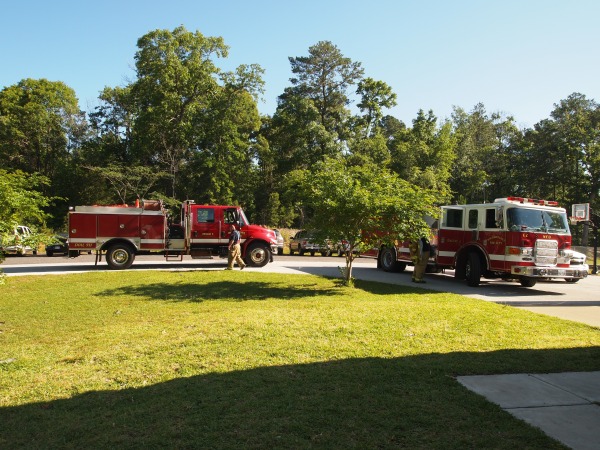 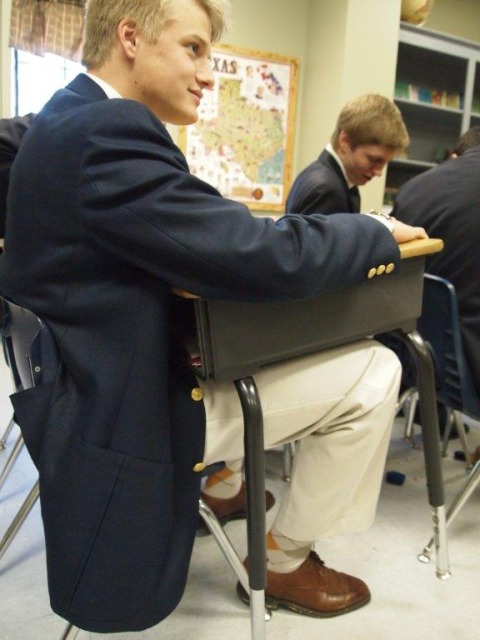 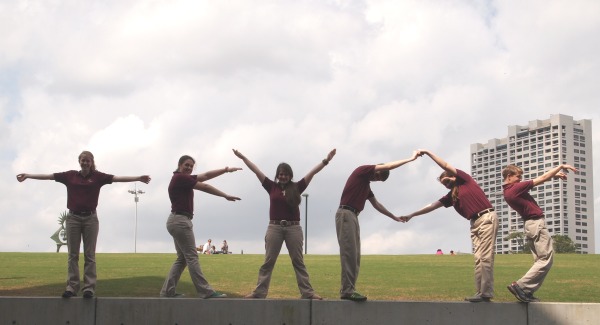 Fourth grader Winston Hebert, son of Mike and Gigi Hebert, and seventh grader Wesley Young, son of Tim and Kelly Young, presented their winning papers to the ladies of the Daughters of the Republic of Texas on Tuesday, April 10th, at their monthly luncheon. Both the fourth and seventh grade classes participated in this year’s Texas history essay contests; Winston’s essay featured interesting facts and anecdotes about hunter and Texas Ranger “Bigfoot” Wallace, and Wesley’s recounted the events leading up the famous 18-minute Battle of San Jacinto that won Texas her freedom from Mexico on April 21, 1836.

We are very proud of these young men and their accomplishments. It’s always nice when our students’ hard work is recognized. Congratulations again, Winston and Wesley! 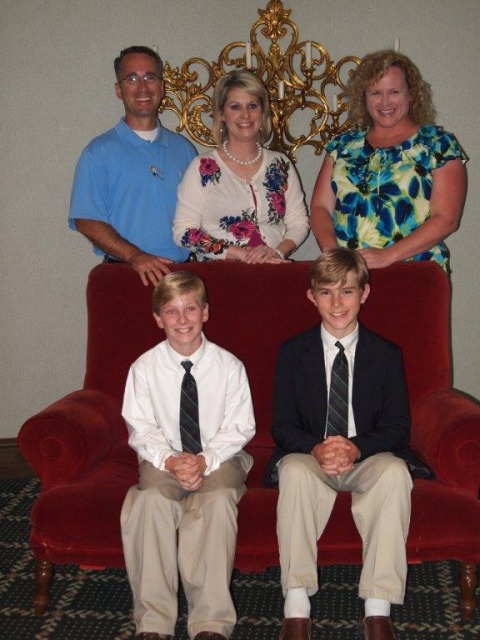 Sheriff Kerss made a presentation to the 9th grade government class and was joined by the 6th graders as well. Sheriff Kerss explained where the office of sheriff came from, what his job entails, and what the sheriff’s office’s responsibilities are.

We appreciate Sheriff Kerss’s generosity and service in coming to visit our students. 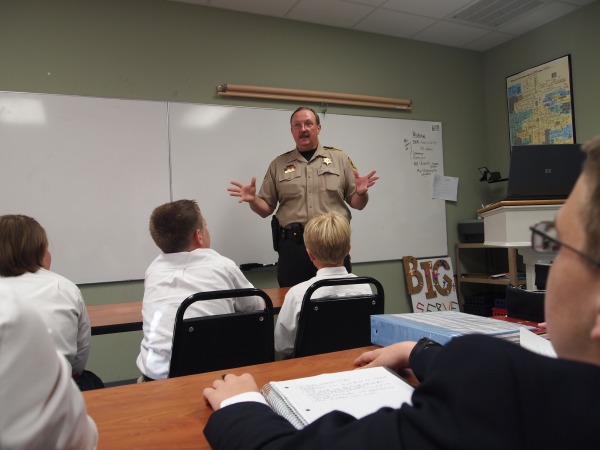 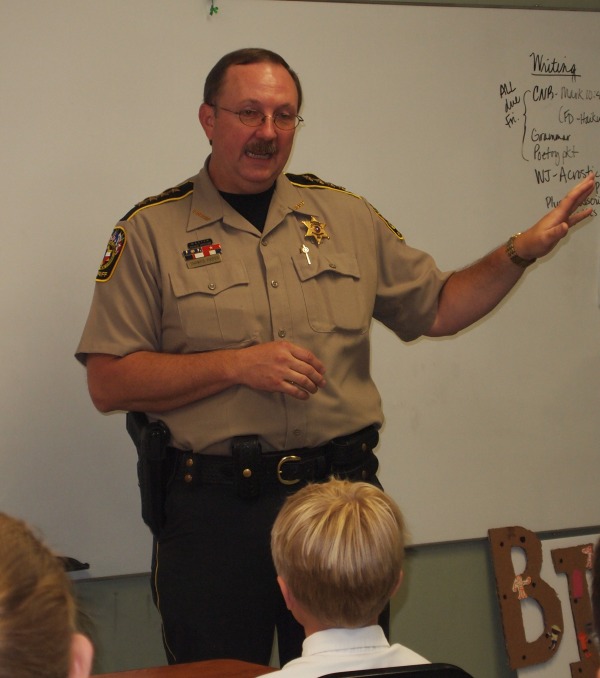 Congratulations to the Regents high school TAPPS Speech and Academic team, which won 6th place in the 1A division at the state competition at Concordia University in Austin, Texas, on March 30-31. 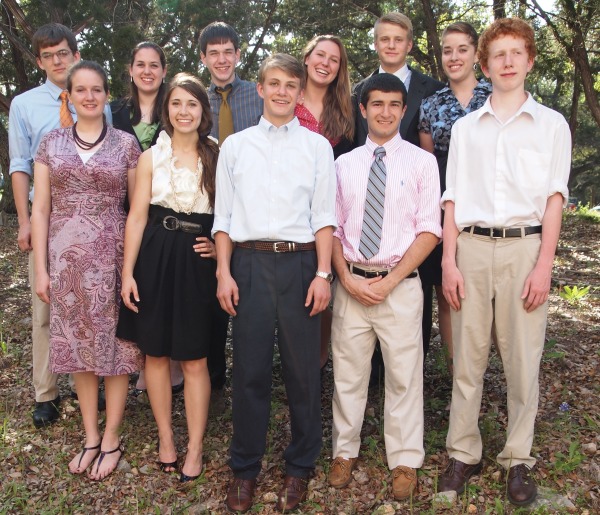 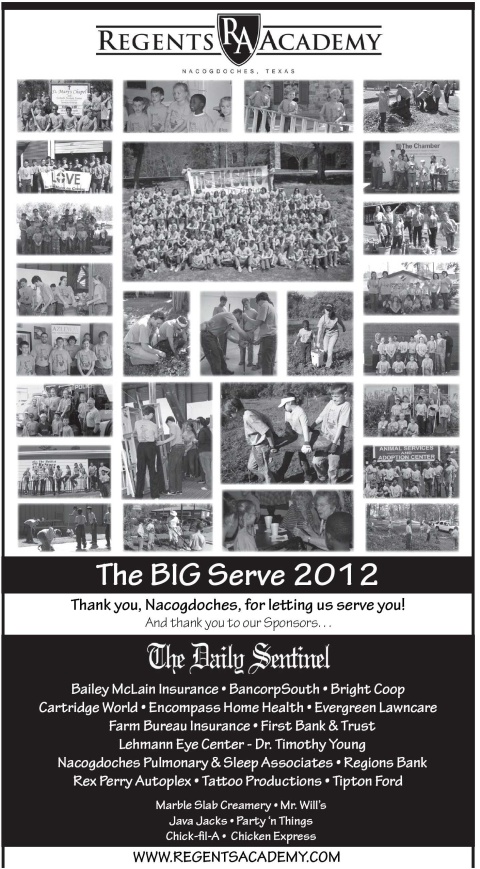