The House of Christmas
By G. K. Chesterton

There fared a mother driven forth
Out of an inn to roam;
In the place where she was homeless
All men are at home.
The crazy stable close at hand,
With shaking timber and shifting sand,
Grew a stronger thing to abide and stand
Than the square stones of Rome.

For men are homesick in their homes,
And strangers under the sun,
And they lay on their heads in a foreign land
Whenever the day is done.
Here we have battle and blazing eyes,
And chance and honour and high surprise,
But our homes are under miraculous skies
Where the yule tale was begun.

A Child in a foul stable,
Where the beasts feed and foam;
Only where He was homeless
Are you and I at home;
We have hands that fashion and heads that know,
But our hearts we lost – how long ago!
In a place no chart nor ship can show
Under the sky’s dome.

This world is wild as an old wives’ tale,
And strange the plain things are,
The earth is enough and the air is enough
For our wonder and our war;
But our rest is as far as the fire-drake swings
And our peace is put in impossible things
Where clashed and thundered unthinkable wings
Round an incredible star.

To an open house in the evening
Home shall men come,
To an older place than Eden
And a taller town than Rome.
To the end of the way of the wandering star,
To the things that cannot be and that are,
To the place where God was homeless
And all men are at home.

The Regents KPrep through 4th graders did just that on November 19 when they visited Willowbrook Nursing Center. The students hand delivered stained glass windows they had made in Mrs. Ashley Bryant’s art class. They presented musical selections, led by Mrs. Carolyn Andrews, and recited Scripture for the residents.

Pictured below are 1st grader Tread Woodard and then kindergartner Sarah Grace Altman, along with Willowbrook residents and other Regents students Cody Monlezun, Juliet James, Susan Coker, and Sheetal Bapu.

The 8th graders delivered food to two area elementary schools on Friday, December 10, in partnership with Harvest House. Regents 5th, 6th, and 7th graders all delivered food on previous Fridays. Thanks to Mrs. Marleyna Dinan for organizing this project. 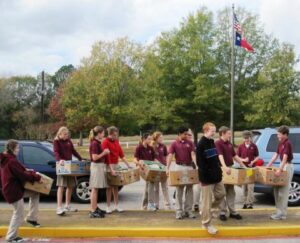 Will Young did it again.

Last Saturday 312 runners participated in the Jingle Bell Run in Nacogdoches. Regents eighth grader Will Young finished 3rd overall and 1st in his age category. Congratulations for a job well done, Will!

Will is the son of Dr. and Mrs. Tim and Kelly Young. His sister and two brothers are also students at Regents Academy. 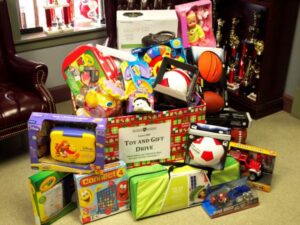 We are grateful for all our families who donated to our Toy and Gift Drive to benefit the families served by Love INC. We collected 71 toys and gifts! These gifts were delivered to Love INC, who distributed them last week to area families in need.

Thank you for your giving spirit and your generosity!

On Friday, December 3, high school students returned to their BIG Serve site — the home of Mrs. Addie Taylor — to have a fall service project. The students have come to love Mrs. Taylor, who lives alone in her Nacogdoches home. Students raked, picked up trash, and built ramps on the back of Mrs. Taylor’s home with help from our all-around Mr. Fix-it, Roy Bradley.

What a great afternoon the students had together, working, serving, and laughing. 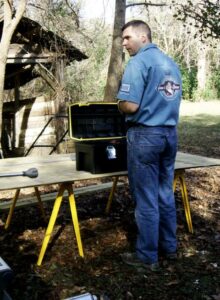 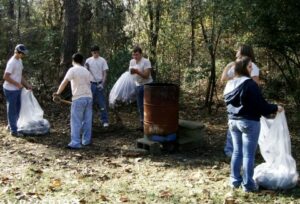 It was a packed house at Cole Concert Hall. The students were dressed in their best school attire. Parents and grandparents looked on expectantly. Musical instruments waited, ready to be brought to life. Then poems and songs rang through the hall, and applause echoed back. The Regents Academy Evening of Music and Recitation was a brilliant evening.

Let me express my heartfelt thanks to the Regents teachers, who did a superb job preparing the students to recite and sing. Our music teachers, Mrs. Carolyn Andrews and Miss Emily Alders, showed off a semester’s practice and instruction. The High School Vocal Ensemble and String Ensemble both performed wonderfully. The audience was enthusiastic and attentive.

And let me say, most of all, how proud I am of our students. Simply put, there are no better students in East Texas. With a display of talent, poise, and joy, they presented musical and poetic pieces that reflected the beauty of God’s creation, the wonder of childhood and adventure, and the spirit of the Christmas season. Truth, goodness, and beauty shone out from the stage of Cole Hall as they performed.

The Christmas season is a season of joy, as we celebrate the incarnation of our Lord, and I hope the Regents Christmas program brought you great joy on Thursday night.

Let me share one of my favorite Christmas poems and wish you and your family a joyous Advent season and a Merry Christmas.

The Nativity
By C.S. Lewis

Among the oxen (like an ox I’m slow)
I see a glory in the stable grow
Which, with the ox’s dullness might at length
Give me an ox’s strength.

Among the asses (stubborn I as they)
I see my Saviour where I looked for hay;
So may my beastlike folly learn at least
The patience of a beast.

Among the sheep (I like a sheep have strayed)
I watch the manger where my Lord is laid;
Oh that my baa-ing nature would win thence
Some wooly innocence!

Our school frequently invites area pastors to come to the Regents campus and speak to our teachers and students during our morning assembly. On December 3 we were very happy to welcome a new friend, Pastor Mike Davis, who shared a devotional from Ecclesiastes. Pastor Davis ministers at Grayland Baptist Church near Nacogdoches.

Take a moment to listen to his devotional. You’ll be glad you did.

It was one of the most dramatic and eye-catching news stories in recent years. The emergency landing of US Air flight 1549 on the Hudson River on January 15, 2009, captured the attention of the nation. Captain Chesley “Sully” Sullenberger’s quiet competence and coolness under pressure during the emergency, and then his humility afterward, were an example of heroism for a nation that seems starved for virtuous role models.

Recently Capt. Sullenberger received a coveted award from the National Air and Space Museum. In an interview with Smithsonian magazine (Nov. 2010), he made several fascinating comments. One in particular stood out.

“Out of a 43-year career, my entire life is being judged on the basis of those 3 minutes and 28 seconds. We never know which flight will test us. So it’s incumbent on each of us to be vigilant and avoid complacency. I had gotten to a point late in my career when I thought that test would never happen to me. I was wrong.”

Capt. Sully’s wise words are words any parent must take to heart. Children remember the oddest things; they may not recall the expensive gift you bought them or the elaborate plan you made for a vacation, but they will remember the time you wore a funny hat and capered around the living room on a whim. Likewise, a small omission or an ill-timed word can have a huge impact on a child.

Likewise, a teacher never knows when the moment of greatest impact will come. Teachers often fall into the trap of thinking that years from now our students will remember the subjects we taught them and be carried away in thoughtful reverie about our stirring lectures on the Monroe Doctrine. Instead, they will remember the most unlikely moments and events, times that probably don’t relate to academics at all.

When I think back to the teachers who made the biggest impact on me, I don’t recall a single thing they said in class during a lecture or a lesson. Rather, their impact had to do with their character, their passions, their interest in me, a very annoying teenage boy with bundles of insecurities and bad habits.

“We never know which flight will test us.”

Whether we are a parent, a classroom teacher, a Sunday School teacher, a pastor, or just a friend, we never know when our actions and words will define us. Therefore, we must “be vigilant and avoid complacency” at all times. We need to strive to be like Christ at each moment, knowing that every moment is a gift from God that bears the potential of influencing others. We should be reminded that God uses us in other people’s lives, and that He uses us in unexpected ways and at unexpected times.

Boys take faith.  Anyone that has had boys or has taught boys knows that they take A LOT of faith!  I must admit that having my own family made up of the male species, me being the exception, and teaching sixth grade boys I have an abundance of exposure to boys!  I must also admit that at times I forget that boys take faith!  I do get discouraged and the boys in my life bring disappointment in ways that are hard for a female to understand.  I regularly have to give myself a pep-talk about being faithful and not losing faith, that God does love these young men in my midst and that I have a duty to our Lord to faithfully love and correct them.

This morning the Lord gave me a big hug from Heaven.  Our morning assembly began as usual and the children that are late are required to wait in the hall until the Scripture reading is completed so that they won’t disrupt the the reading of God’s Word.  We always have some students waiting in the hall.  These children filed in after the reading and the assembly continued on.  We were almost finished with the assembly when I looked into the hallway and there I saw one of our “big boys” in secondary school, obviously later than the rest.  Mr. Bryant was ready for us to sing the Gloria Patri and we all raised our hands to praise the Lord one last time before we were released to start our day in our classrooms.  Tears quickly came to my eyes as I watched this young man, who will soon be on his own in the world, raise his hands and his mouth followed the words that we all sang.  My point being that it would have been so easy for him to just stand in the hall since few could even see him.  He could have stayed at his locker two minutes longer for the assembly would conclude very shortly.  This young man could have walked to his first period class (and two years ago, I would have fully expected him to do so) but he chose to stand in the hallway, raise his large manly hands to Heaven and sing praises to our Lord.    He has no idea what a faith boost he gave me today!  (I almost ran to hug him when the song was over! :>)

With more faith than usual, and a gratefulness for God’s goodness, I pray along with Ignatius of Loyola:

Dearest Lord, teach me to be generous.

Teach me to serve you as you deserve;

to give, and not to count the cost;

to fight, and not to heed the wounds;

to labor, and not to seek to rest;

to give of myself and not to ask for reward,

except the reward of knowing that I am doing your will.  Amen.